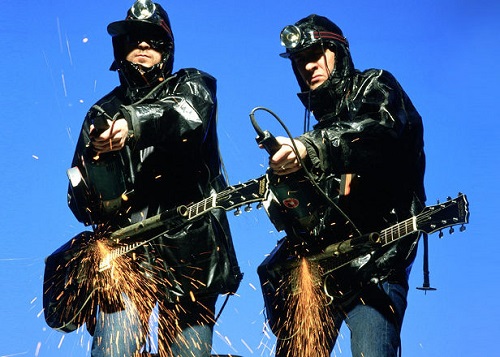 The KLF (also known as The Justified Ancients of Mu Mu, furthermore known as The JAMs and The Timelords and by other names) were a British electronic band of the late 1980s and early 1990s.

Beginning in 1987, Bill Drummond (alias King Boy D) and Jimmy Cauty (alias Rockman Rock) released hip hop-inspired and sample-heavy records as the Justified Ancients of Mu Mu, and on one occasion (the British number one hit single "Doctorin' the Tardis") as the Timelords. The KLF released a series of international hits on their own KLF Communications record label, and became the biggest-selling singles act in the world for 1991. The duo also published a book, The Manual (How to Have a Number One the Easy Way), and worked on a road movie called The White Room.

From the outset, they adopted the philosophy espoused by esoteric novel series The Illuminatus! Trilogy, gaining notoriety for various anarchic situationist manifestations, including the defacement of billboard adverts, the posting of prominent cryptic advertisements in NME magazine and the mainstream press, and highly distinctive and unusual performances on Top of the Pops. Their most notorious performance was a collaboration with Extreme Noise Terror (and Barney Greenaway of Napalm Death) at the February 1992 BRIT Awards, where they fired machine gun blanks into the audience and dumped a dead sheep at the aftershow party. After this performance the duo departed the music business and, in May 1992, deleted their entire back catalogue.

With the KLF's profits, Drummond and Cauty established the K Foundation and sought to subvert the art world, staging an alternative art award for the worst artist of the year and burning one million pounds sterling. Drummond and Cauty remained true to their word of May 1992; the KLF Communications catalogue remains deleted in the UK, but The White Room is still being pressed in the U.S. by Arista. They have released a small number of new tracks since then, as the K Foundation, the One World Orchestra and most recently, in 1997, as 2K.